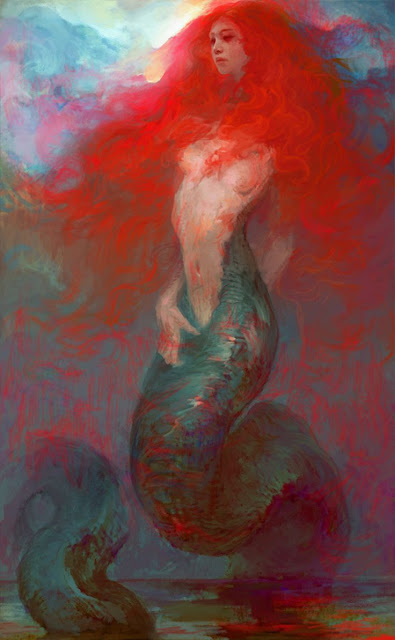 LET us go then, you and I,
When the evening is spread out against the sky
Like a patient etherized upon a table;
Let us go, through certain half-deserted streets,
The muttering retreats
Of restless nights in one-night cheap hotels
And sawdust restaurants with oyster-shells:
Streets that follow like a tedious argument
Of insidious intent
To lead you to an overwhelming question ...
Oh, do not ask, "What is it?"

Let us go and make our visit.
In the room the women come and go
Talking of Michelangelo.

The yellow fog that rubs its back upon the window-panes,
The yellow smoke that rubs its muzzle on the window-panes,
Licked its tongue into the corners of the evening,
Lingered upon the pools that stand in drains,
Let fall upon its back the soot that falls from chimneys,
Slipped by the terrace, made a sudden leap,
And seeing that it was a soft October night,
Curled once about the house, and fell asleep.

In the room the women come and go
Talking of Michelangelo.

And indeed there will be time
To wonder, "Do I dare?" and, "Do I dare?"
Time to turn back and descend the stair,
With a bald spot in the middle of my hair--
(They will say: 'How his hair is growing thin!")
My morning coat, my collar mounting firmly to the chin,
My necktie rich and modest, but asserted by a simple pin--
(They will say: "But how his arms and legs are thin!")
Do I dare
Disturb the universe?
In a minute there is time
For decisions and revisions which a minute will reverse.

For I have known them all already, known them all:
Have known the evenings, mornings, afternoons,
I have measured out my life with coffee spoons;
I know the voices dying with a dying fall
Beneath the music from a farther room.
So how should I presume?

And I have known the eyes already, known them all--
The eyes that fix you in a formulated phrase,
And when I am formulated, sprawling on a pin,
When I am pinned and wriggling on the wall,
Then how should I begin
To spit out all the butt-ends of my days and ways?
And how should I presume?

And I have known the arms already, known them all--
Arms that are braceleted and white and bare
(But in the lamplight, downed with light brown hair!)
Is it perfume from a dress
That makes me so digress?
Arms that lie along a table, or wrap about a shawl.
And should I then presume?
And how should I begin?

Shall I say, I have gone at dusk through narrow streets
And watched the smoke that rises from the pipes
Of lonely men in shirt-sleeves, leaning out of windows? ...

I should have been a pair of ragged claws
Scuttling across the floors of silent seas.


And the afternoon, the evening, sleeps so peacefully!
Smoothed by long fingers,
Asleep ... tired ... or it malingers,
Stretched on the floor, here beside you and me.
Should I, after tea and cakes and ices,
Have the strength to force the moment to its crisis?
But though I have wept and fasted, wept and prayed,
Though I have seen my head (grown slightly bald) brought in upon a platter,
I am no prophet--and here's no great matter;
I have seen the moment of my greatness flicker,
And I have seen the eternal Footman hold my coat, and snicker,
And in short, I was afraid.

And would it have been worth it, after all,
After the cups, the marmalade, the tea,
Among the porcelain, among some talk of you and me,
Would it have been worth while,
To have bitten off the matter with a smile,
To have squeezed the universe into a ball
To roll it towards some overwhelming question,
To say: "I am Lazarus, come from the dead,
Come back to tell you all, I shall tell you all"--
If one, settling a pillow by her head
Should say: "That is not what I meant at all;
That is not it, at all."

No! I am not Prince Hamlet, nor was meant to be;
Am an attendant lord, one that will do
To swell a progress, start a scene or two,
Advise the prince; no doubt, an easy tool,
Deferential, glad to be of use,
Politic, cautious, and meticulous;
Full of high sentence, but a bit obtuse;
At times, indeed, almost ridiculous--
Almost, at times, the Fool.

Shall I part my hair behind? Do I dare to eat a peach?
I shall wear white flannel trousers, and walk upon the beach.
I have heard the mermaids singing, each to each.

I do not think that they will sing to me.

I have seen them riding seaward on the waves
Combing the white hair of the waves blown back
When the wind blows the water white and black.
We have lingered in the chambers of the sea
By sea-girls wreathed with seaweed red and brown
Till human voices wake us, and we drown.

"The Love Song of J. Alfred Prufrock" was originally printed in Poetry, June 1915.

Art Inspired by The Love Song of J. Alfred Prufrock 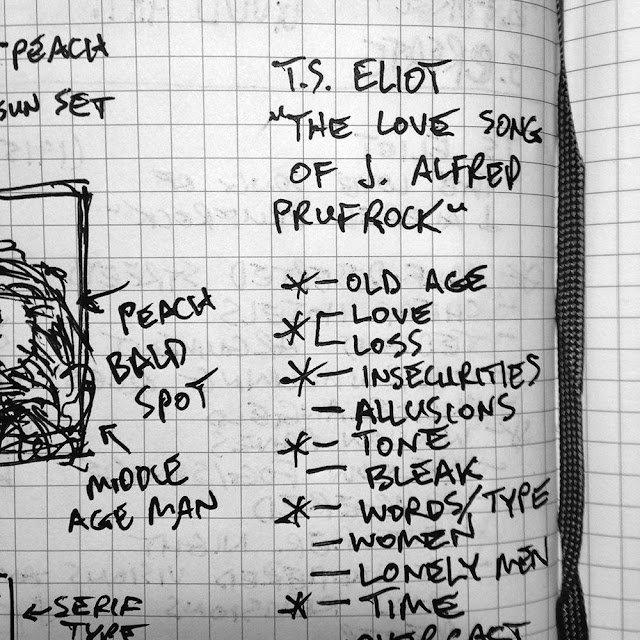 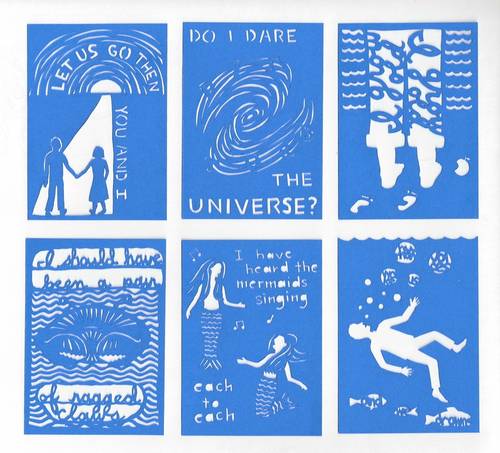 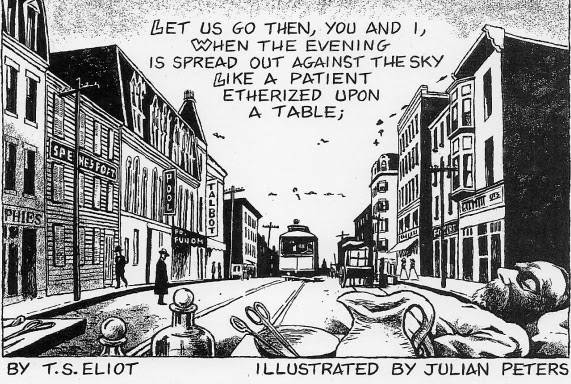 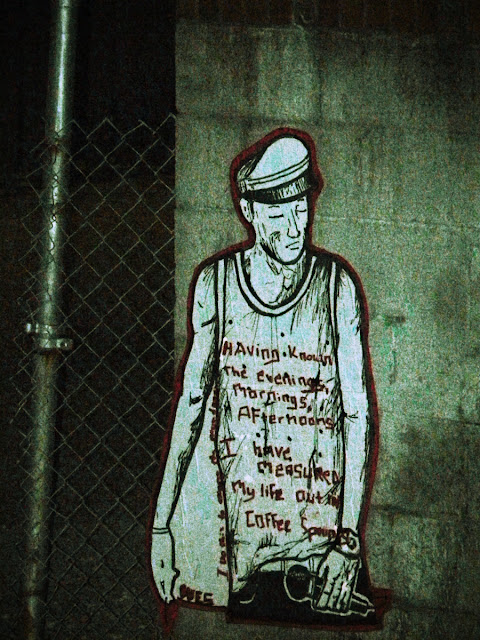 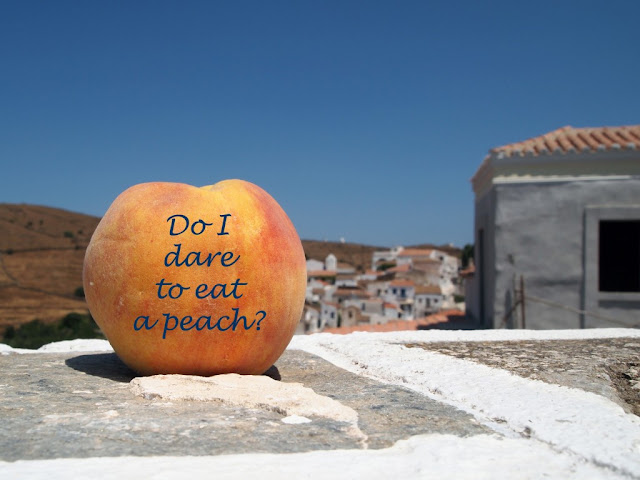 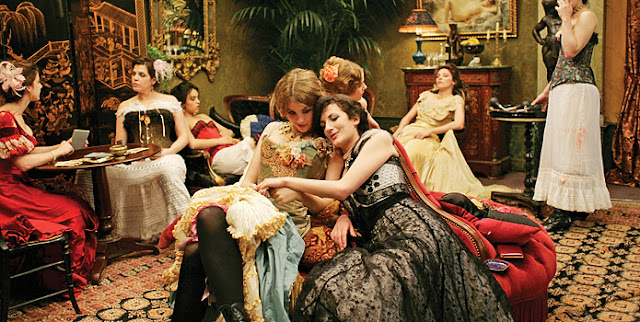 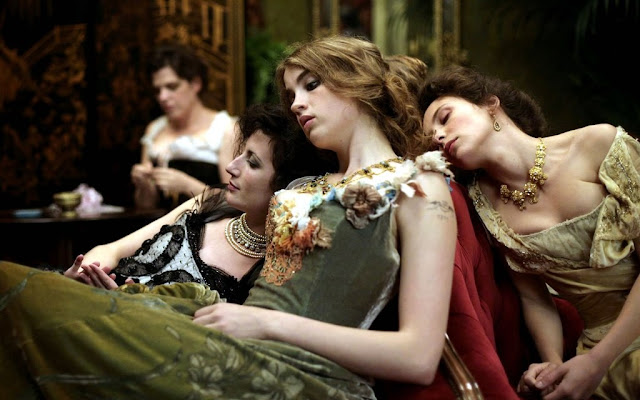 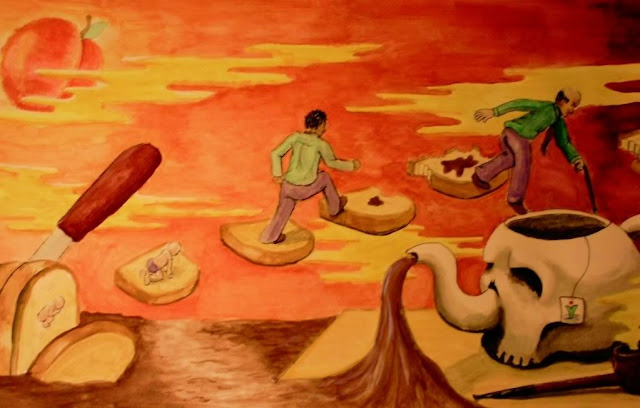 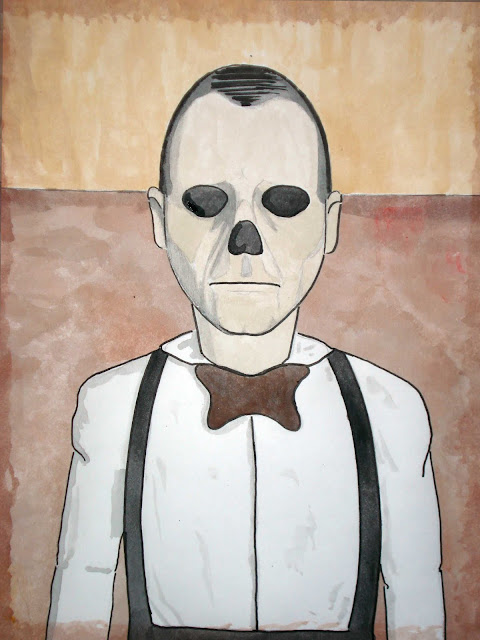 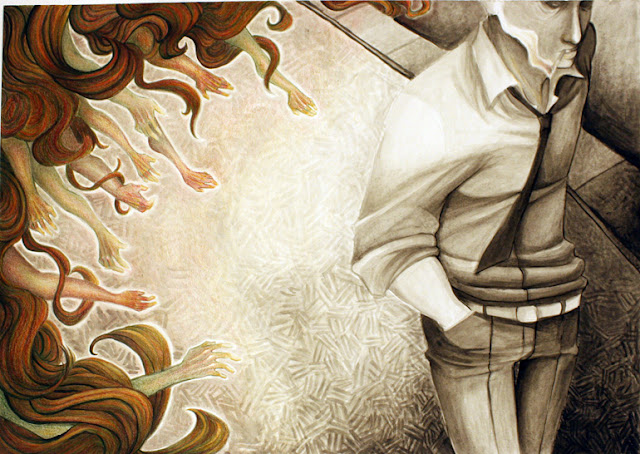 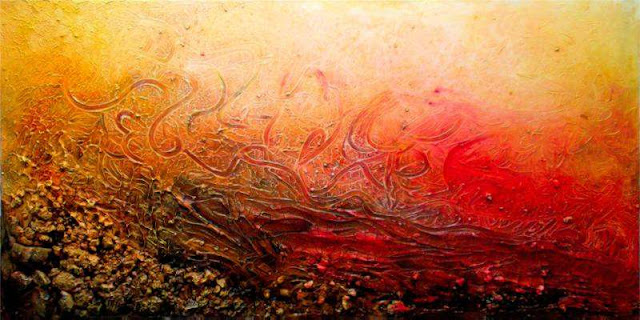 Summary of the Poem -
Meet Prufrock. (Hi, Prufrock!). He wants you to come take a walk with him through the winding, dirty streets of a big, foggy city that looks a lot like London. He’s going to show you all the best sights, including the "one-night cheap hotels" and "sawdust restaurants." What a gentleman, he is! Also, he has a huge, life-altering question to ask you. He’ll get to that later, though.

Cut to a bunch of women entering and leaving a room. The women are talking about the famous Renaissance painter Michelangelo. We don’t know why they’re talking about Michelangelo, and we never learn. Welcome to Prufrock’s world, where no one does anything interesting.

Did we mention that it’s foggy. Like really, really foggy. The fog has a delightful yellow color, and it acts a lot like a cat.

Yawn. What a day. We’ve accomplished so much already with Prufrock. There’s still a lot of stuff he still wants to get done before "toast and tea." People to see, decisions to make, life-altering questions to ask. But not yet…There’s still plenty of time for all that later.

Where did the women go? Oh, yes, they’re still talking about Michelangelo.

But he still has pleeen-ty of time. And he’s accomplished so much already! For example, he has drank a lot of coffee, and he’s lived through a lot of mornings and afternoons. Those are pretty big accomplishments, right? Plus, he’s known a lot of women. Or at least he’s looked at their hairy arms, and that’s almost as good.

Prufrock says something about how he wishes he were a crab. Oh, Prufrock! Always the joker. Wait, you were serious? That’s kind of sad, my friend. Don’t you have important things to do? 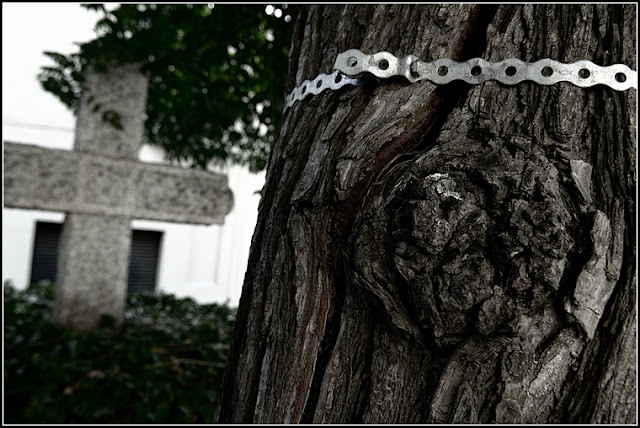 Oops! It looks like he didn’t do that really important thing he meant to do. He was going to tell someone something life-altering, but he was afraid of being rejected. So he didn’t. Oh well.

Meanwhile, Prufrock keeps getting older. He doesn’t worry about that really important thing anymore. Instead, he worries about other important things, such as whether to roll his pant-legs or eat a peach.

It turns out that Prufrock really likes the ocean. He says he has heard mermaids singing – but they won’t sing to him. Boy, you sure do talk a lot about yourself, Prufrock. Finally, he brings us back into the conversation. He talks about how we lived at the bottom of the sea with him (geez, we don’t remember that one!). It turns out we were asleep in the ocean, but all of a sudden, we get woken up by "human voices." Unfortunately, as soon as we wake up, we drown in the salty ocean. Boy, what a day. We thought we were talking a walk, and now we’re dead. 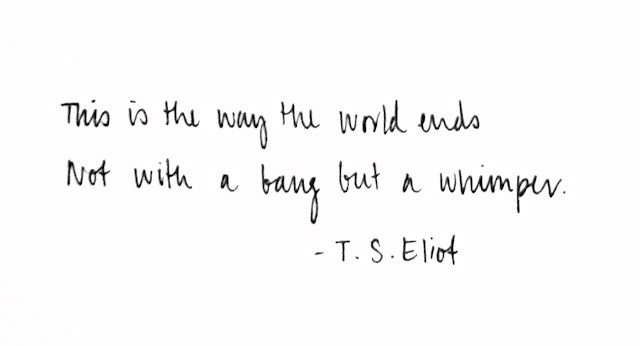 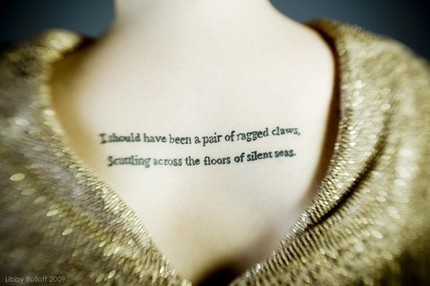 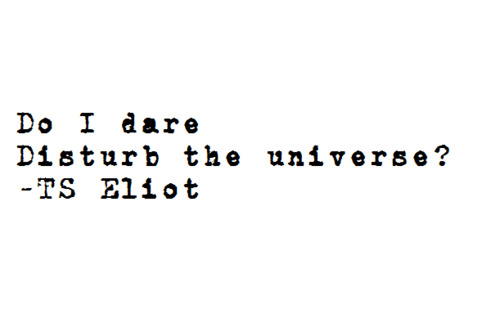